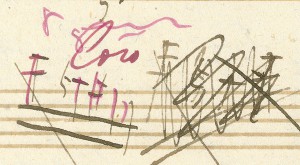 “Beethovens Werkstatt” is a project funded by the Akademie der Wissenschaften und Literatur Mainz with a duration of 16 years. In cooperation of the “Beethovenhaus Bonn” and the “Musikwissenschaftliches Seminar Detmold” the working group consists of six researchers, editors and musicologists. The project aims to combine two of the most current research areas in music philology – the exploration of the genesis of musical works incorporated in texts of varying completeness.

The projected multi-perspective focus becomes a central musicological research topic for gaining a differentiated picture of the text-in-progress, making it visible and reflecting it critically. Significant insights are anticipated for evaluating the entire compositional history and aesthetics of the 19th and 20th century crucially founded on Beethoven. The project is organized in a set of five modules, each concentrating on different aspects of compositional processes, musical variance, and reorganization of musical material found in Beethoven’s works. Each module builds on its predecessors, with the last showing the full potential of digital editions by combining a traditional edition of the work, a source edition and a genetic edition of the work’s text. These editions will all be prepared and edited using the Edirom tools, whereas on the data layer, everything will be encoded in MEI. The project aims to trace the textual development very closely, so that information beyond the current level of detail provided by MEI is required.

Catalogue of the Works of Frederick Delius